So, what have I been up to this year?  It has been an eventful time for me as a writer, and doing an annual round-up is a good excuse to look back on it all…

One of the highlights was my trip to Aberystwyth to the New Welsh Writing awards in February, where I was placed second by judges Mark Cocker and Gwen Davies for my long non-fiction piece, Heligoland: An Ecology of Exile.  I was delighted and proud, and my prize of a week’s residential course at the wonderful Writers’ Centre at Tŷ Newydd led to more excitements, of which more later…

After that, I launched into a very different experience as a consultant poet for Rachel Burn Dance for their performance, Threshold, based on Walt Whitman’s classic poem Leaves of Grass.  It was the first time I had worked with a dance company and I was honoured to be part of the experience.

March saw the inaugural publication from Essex-based Dunlin Press, Est: Collected Reports from East Anglia, to which I had contributed.  This beautiful anthology has garnered plenty of critical praise, including a special mention from Libby Purves for my essay, “Digging”, which she describes as, “a wonderful essay on Sutton Hoo and its ghosts”.  You can buy your own copy via the website here.

Another important event in March was the appointment of the new Fenland Poet Laureate, Jonathan Totman, who has proved such a fantastic choice in the months that followed!  I am very proud that these awards, which I help to run, and which aims to encourage poets and poetry in the fenland area, is now in its fifth year!  If you live, work or study in fenland, do consider entering – details are on the ADeC website here.

My poetry reading at the Stained Glass Museum in Ely to celebrate an exhibition on the theme of Dylan Thomas’ work, and the launch of former Fenland Poet Laureate Poppy Kleiser’s splendid anthology, Poems for Peace, were other spring highlights, as well as taking part in Poetry to Go at Cambridge Literary Festival – enormous fun writing bespoke poems for the punters. 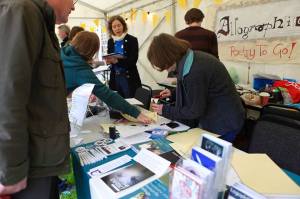 I am operating a naked flame, fortunately without tragic results. (Photo: Ida Huntic)

Looking back, I see I didn’t include this on my blog at the time, but my long hours and hair-whitening levels of stress, applying for funding to start a PhD, came to a nail-biting finish in May, when I was awarded a Silberrad scholarship by the University of Essex to enable me to study for a Creative Writing PhD, expanding on my MA work on the North Sea islands of Heligoland.  I expect my blog will include more about this in due course…

Also in May, I enjoyed taking part in one of the nature writing workshops run by Lois Williams and one of my fellow MA Wild Writing graduates, Melinda Appleby, at the BTO headquarters in Thetford – an inspiring day at an inspiring location.  The series of workshops, under the Breaking New Ground landscape partnership, culminated in a gorgeously produced pamphlet of poems, including my poem, “Homing”, and an exhibition which takes place in January in Bury St Edmunds – maybe take a look if you’re in the area?

Throughout 2015, the monthly open mic spoken word night Fen Speak, which I help to run, said a tearful goodbye to its founder Leanne Moden, who is now being a whirlwind of poetic activity in Nottingham…  Fen Speak continues, however, hosted by the scintillating charisma of Jonathan Totman and Poppy Kleiser, so do join us…

I give an emotional speech of farewell to Leanne Moden at Fen Speak (photo: Fay Roberts)

In September I ran a series of creative writing workshops in local libraries in Littleport and March.  It was a tremendous experience and I hope to be doing some more in 2016.  A particular memorable moment was getting the participants to write an Anglo Saxon riddle and then guess each other’s answers!  Fantastic fun.

In September I started my PhD, which I am enjoying a great deal – though unfortunately it’s left me rather too busy to keep up my blog.  I will try to do better in 2016…

My week’s residential course at Tŷ Newydd in October was a great experience – it is such a beautiful, peaceful location on the Welsh coast, I was just blown away.  Great walks and fantastic food, and two amazing tutors, Pascale Petit and Niall Campbell, who led some thought-provoking workshops on the theme of “The Trance of Place”.  It was the first time I had been on a residential writing course, and I did wonder how I would manage, living with a dozen other poets for a week, and whether I would end up wanting to run and hide, but everyone was very friendly…  I wrote a poem there, “Fen, Again,” which I later entered in the Resurgence Ecopoetry competition, and made the shortlist out of thousands of entries.  The judges were former Poet Laureate Andrew Motion, Alice Oswald and Jo Shapcott, and I am just so pleased that they like my work.  The winning and shortlisted poems can be found here.  I also got to go to a glittering awards ceremony in London and meet Joanna Lumley, one of the founders of the award, thus making my fairly humdrum life as a poet look ludicrously glamorous…

So many memorable times, but perhaps the most moving was singing at the first performance of “A Fenland Christmas,” my poem which was set to music by talented local composer John Lawson Baker, who died earlier this year and is much missed.  Although I am sorry it was never performed during his lifetime, it had a very creditable performance by the St Peter’s Singers at the Advent Carol Service this year at St Peter’s Church in Ely.

I think that’s quite enough excitement for one year…  I am very lucky to be able to do what I love and work with such incredible people.  Thank you for reading this blog and for the kind comments you have sent or posted.  I wish you all a creative 2016.

The Team Behind The Dwarves Of Glistenveld

a to z of the writer of the a to z

News, views and creative ideas from the University of Essex's Literature, Film, and Theatre Studies Department

Jem Bloomfield on books and faith

Engaging at the intersection between faith + justice

NOT the social anthropologist. Though confusingly I did an ethnographic PhD.

Just like the Thesis Whisperer - but with more money